Marketing Strategy case studies that work in the market place!

Problem Situation:
In a service industry, the advertiser and its competitor shared a similar pie of market share which lead to a competition in business plans. The competitor had closely monitored the advertiser’s advertising movements and followed their marketing and promotion strategies in getting potential customers. Whenever the advertiser launched an advertisement, the competitor followed suit the idea in the similar way. The advertiser felt threatened in a way.

The Result:
The competitor did not follow the new direction as placing a big recruitment advertisement is costly. Moreover, their objective was to attract potential customers instead of recruiting staff. The advertiser’s twist in marketing strategy solution did not match their objective. On the other hand, such a direction not only attracted quality candidate application to the advertiser, it also helped in brand building. This strengthened the consumers’ confidence towards the quality of service in the company as the consumers were aware of the high recruitment standards of the company. 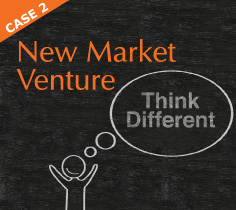 Problem Situation:
A Japanese company ventured to Singapore for marketing advice on a video display advertisement but received ordinary marketing strategy they felt was overused. Several meet ups with different agencies only resulted in the common advice of using the local language i.e. English and Chinese language in the video display advertisement. The reason was so that viewers can understand the product and its selling preposition easily when viewing the advertisement. However, the common strategy will not make the product advertisement stand out from its competitors.

The Result:
Viewers were more curious about the advertisement from the start because of the foreign language and completed watching the entire video display. The idea is that if viewers had understood the advertisement by listening to the local language, their interest to visually watch the entire video display will be diluted. Curiosity had captured the viewers’ attention to want to watch and find out what the advertisement was about. Suitable marketing strategy to be implemented for different purpose of the marketing campaign to achieve the intended result.

Contact us today to find out what would be the suitable marketing strategy for your business!